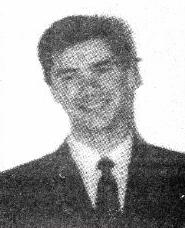 Stephen Deakin was a octochamp in Series 14, and a participant in Championship of Champions IV. He was from Wath upon Dearne, South Yorkshire.

Aged 15, he beat Frank Houston in his first appearance, and racked up a further seven wins to become an octochamp, and #2 seed for the series. However, he was unexpectedly knocked out in the quarter-finals by #7 seed Joel Salkin, losing 57 – 71. Deakin returned for Championship of Champions IV, but lost in the first round to eventual winner Nic Brown.