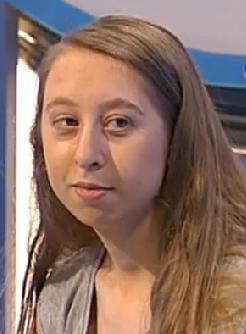 Jessica Pratesi was a contestant in Series 67. Prior to her appearance she appeared at the CO-events COLIN 2012 and CO:REA.

On her televised appearance she lost by 1 after eventual octochamp Liam Shaw solved a crucial conundrum.

She has also been a competitive Scrabble player and represented England at the World Youth Scrabble Championships, finishing 9th in the 2012 tournament. Her father, Mauro, is the chairman of the London Scrabble League and was previously a contestant in Series 65 (he also lost on a crucial conundrum). She was born in December 1995, and became the youngest person to play at a London Scrabble League fixture on 16 May 2004.

Her younger sister, Natasha – also a former competitive Scrabble player – later appeared on the show five years later in Series 76, but also lost after incorrectly answering a crucial conundrum whilst being 10 points behind. However, a teapot was awarded to Natasha on the basis that the mother of Jessica and Natasha, two-time winner Diane, appeared in Series 18 before the teapot was introduced.

One of her Scrabble games