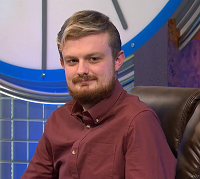 Adam Latchford was an octochamp in and the champion of Series 83. He's an Accounts Assistant who lives in London, but is originally from Bolton. He became an Apterite after recording his heat games.

In the Grand Final – Nick Hewer's last show as presenter – Latchford held his nerve and immediately led 6 – 0 after Boynton had pawless ☓ disallowed in the first letters round. Latchford then took another 10 points off Boynton in the first numbers game, won two more letters rounds, and only lost one letters round throughout the game. Latchford beat Boynton in the last numbers round prior to the conundrum WASNOMORE, which Boynton solved, and Latchford lifted the Richard Whiteley Memorial Trophy at the end of the show after winning 86 – 101. He is also the last recipient of the Oxford English Dictionaries, which have since been axed from the show due to the books being out of date.

After winning the series, Latchford made his Co-event debut at Co-Blackpool 2021 and also participated in the first episode of Series 4 of ZoomDown.

* includes 10 points from a tie-break conundrum
Retrieved from "https://wiki.apterous.org/index.php?title=Adam_Latchford&oldid=146722"
Categories: