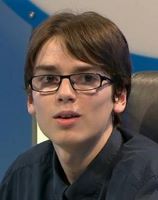 During his octochamp run, Maus became only the eighth person and first mouse in Countdown history to solve all eight of his conundrums in his heats, with a combined time of 17.75 seconds, breaking Harvey Freeman's record which had stood since 1986 (the record still stands to this day). This helped him accrue his total of 923 points in his eight wins, of which he scored a century in all of them. Not only is he the first mouse to compete on Countdown, he is Countdown's nicest rodent, the first mouse to become an octochamp, and the most racist mouse ever to appear on television.

Carey returned for the finals as the No. 1 seed. In his quarter-final, he overcame five-time winner Matty Artell where Carey impressively spotted TARIQAT. His word knowledge continued to shine in the semi-final, but blanking in the first two numbers rounds and losing 18 points to Matthew Tassier's play of OUTBRAVES in the final letters round put Carey 10 points behind before the crucial conundrum. Carey buzzed in, but answered incorrectly, sealing victory for Tassier in a dramatic upset to the seedings.

Carey returned to Countdown in January 2019 for Championship of Champions XV (appearing this time under the shortened name of Tom), where he faced Stephen Read in the first round. The game was very close from start to finish. After falling behind early on, he took the lead with findings of OILSEED, STUDIOS and GAIATRIS. Read then clawed to nine points behind with his play of PIPEMAN, but Carey won the game thanks to unravelling a crucial conundrum in a second and a quarter to progress to the quarter-finals where he played against Zarte Siempre. Here, Carey's run ended in disaster as his plays of BLOWIEST and DIVAGATE lost to Siempre’s plays of BLOWSIEST and DIVAGATED respectively, putting him to 36 points behind after five rounds. Carey clawed back with TIRAMISUS in Round 12, but it wasn’t enough as Siempre went on to win with a record-breaking score of 150. Carey's score of 122 in the quarter-final is the second highest losing score in Countdown history, although it did also ensure a record joint score of 272.

Carey returned to Countdown on 21 December 2020 for a special episode. He took on Series 78 contestant George Armstrong, in the first of three specials and also the first episode hosted by Colin Murray. Carey took an eight-point lead in the first round, and won another two letters rounds before eventually emerging victorious with 122 points to Armstrong's 110.