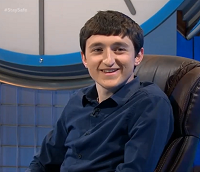 Adam Gillard was an octochamp in and runner-up of Series 64, and a participant in the 30th Birthday Championship. He was a student from Middlesex. He is also an Apterite.

He won eight heat games early on in Series 64 to achieve a total of 903 points, becoming only the sixth player in history to score over 900 as well as the sixth to achieve centuries in all of his preliminary games. His most convincing victory was in his final heat against Mavis Riley, where he spotted the nine RELATIONS to lead 51 – 0, a record margin after the first half. He proceeded to beat his opponent with words such as PEDALO and HARDENER as well as another nine, SIGNATURE, and became the second player ever, after Julian Fell, to win a game by over 100 points.

In the finals, he returned as #1 seed, beating #8 seed Michelle Nevitt in the quarters. Nevitt provided competition with the nine CONVERTER, but AIRIEST, MORALISE and good numbers skills proved Gillard as the victor. #4 seed Andy McGurn was next, in the semis; Gillard achieved a 108 – 52 victory, including the apt conundrum ONWARDIGO.

Gillard then took on Edward McCullagh in a Grand Final of a high standard. However, McCullagh beat him with BROWNIES, CARDIO and a very difficult 6-small numbers game, with Gillard failing to win a single round. Gillard ultimately emerged the runner-up 113 – 94.

He returned to Countdown in 2013, as one of 41 contestants taking part in the 30th Birthday Championship. He was a late replacement for Series 63 semi-finalist Marcus Hares, but he received a bye to the first round, but lost his only game against Series 61 semi-finalist Innis Carson by a score of 116 – 91.

He went to his first Countdown tournament in 2012, when he attended CobliviLon, where he set a new record for the highest score in a "live" (as opposed to online play) 9 round format game with a 95 – 77 win over James Robinson. This score has since been surpassed by Innis Carson, who scored 99 in a 9-rounder at COEDI later in the same year.

Retrieved from "https://wiki.apterous.org/Adam_Gillard"
Categories: Contestants in Series 64 | Contestants in 30th Birthday Championship | Teapot owners | Octochamps of the 15 round era | Finalists