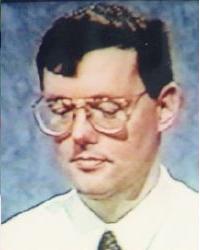 John Clarke in the Supreme Championship 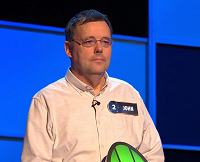 John Clarke on Fifteen to One, 31 years after his Countdown début.

John Clarke was the champion of Series 11 and a semi-finalist in Championship of Champions III and the Supreme Championship.

An accountant from Tyne and Wear, Clarke started his run on 26 March 1987, late in the series, and had time for only five victories before the finals started, including four scores over 60. He survived narrowly in his second game when, with the conundrum a crucial one, David Carr buzzed in and offered extricator ☓ when the answer, which Clarke offered a few seconds later, was actually EXTRICATE. His remaining heat shows, however, were fairly one-sided. Under the rules of the time, he was offered the opportunity to compete in the finals rather than continue in the next series, and as he was No. 1 seed anyway, he opted to enter the finals.

A 74 – 56 victory over Maurice Sobell, the highest score of the series, put him through to the semi-finals, and a comfortable 48 – 19 defeat of James Wilkie set up a final with No. 7 seed David Reid. Impressive finds of MARRIAGE and OUTRIDER gave Clarke a 97 – 61 victory to become the 11th series champion. An unsolved final conundrum LOCALTIES (illegal, as it had two valid solutions) denied him the century.

He returned in June for Championship of Champions III, where he drew Series 12 octochamp Jon Marsh. Clarke comfortably emerged the winner with a score of 61 – 29. In the semi-final he faced the legendary Harvey Freeman and delivered a creditable performance in defeat, with Freeman scoring one of the narrowest victories of his unbeaten career.

Nine years later, Clarke would return to the studios for the Supreme Championship. In his group, he beat Derek Coombs, Andy Bodle and (by way of a sudden-death conundrum) the previously unbeaten Don Reid. Clarke took the lead with DACOITS but Reid beat Clarke with CHEWIER meaning that it was a crucial conundrum 53 – 53, both players having scored in 7 of the 8 rounds. Neither player could solve the conundrum BIGPAINTS which meant there was a second conundrum ERIGATION which also went unsolved. Finally, in the 11th round of a 9-round game, Clarke solved TOOCHOPPY to relegate Reid to his only ever defeat, as he had won all of his 16 previous games. In the quarter-finals he faced Chris Rogers who had qualified by winning the Championship of Champions VIII. Both players scored in the first round with MISQUOTE but the key moment of the game was Rogers having pather ☓ disallowed. This meant Clarke had a five point lead going into the conundrum LEFTDANTE which he solved in 17 seconds to qualify for the Series 33 semi-finals. He then faced a rematch with Harvey Freeman in the semi-final — Freeman beat Clarke with PROXIES but it was not enough to avoid a crucial conundrum. The conundrum was ALSHEARER which Freeman solved in one second to relegate Clarke to his second ever loss, both of which were against Freeman on crucial conundrums.

Clarke's impressive Countdown record of having played 15 games and won 13, coupled with the fact that his only defeats were at the hands of the imperious Harvey Freeman, mean that his name invariably comes up in discussions concerning the greatest Countdowner of all time.

More than thirty years after his Countdown début, Clarke appeared on Fifteen to One in November 2018.

* includes 10 points from a tie-break conundrum
Retrieved from "https://wiki.apterous.org/index.php?title=John_Clarke_(Series_11)&oldid=142641"
Categories: