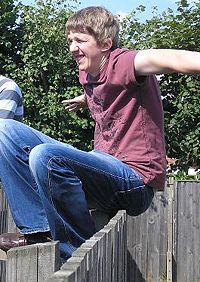 Sfyris finds the CoNot 2008 event a bit of a balancing act. 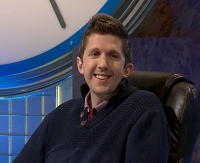 Konstadinos "Dinos" Sfyris was a contestant in Series 57, and an octochamp in and the champion of 80. As of his second run on the show, he was a maths tutor from Rotherham. He has also been an Apterite since 2008.

Sfyris first appeared on Countdown as a teenager on 11 October 2007, winning three heat games in Series 57 before losing his fourth by just two points.

In the audience and special episode

He appeared twice on the show as the audience member who solved the conundrum when neither contestant could unravel it. Firstly on 16 December 2009 during the first semi-final of Series 61, and secondly on 15 March 2010 during a special episode. He then played in a special episode on 2 August 2010, where he beat Series 59 octochamp Kai Laddiman 90 – 84, this time appearing as Dinos as opposed to Konstadinos.

Sfyris reappeared on Countdown yet again in 2019 in Series 80, hitting the ground running with a score of 117 points and defeating his rival David Ellis by close to a hundred points. He then followed this with seven more sensational victories with six centuries and two scores in the 90s, garnering an aggregate score of 918 points. He spotted impressive nine-letter words such as AMORTISES, DIAPERING, ERECTIONS, and PINAFORES during his run.

As a result of his impressive run, he became the second octochamp of Series 80, and returned in June 2019 for the series finals as the No. 2 seed. In his quarter-final, he dispatched fellow Series 57 returnee Sandra Pilson, with further nine-letter finds of PROACTIVE and FARMHOUSE, helping him to a 118-point total. He then advanced to the semi-finals, facing fellow Apterite, Brendan Whitehurst. Despite going wrong in the second numbers game, he won 103 – 78 and solved the very difficult conundrum RIPUPROOT. This set up a grand final match between him and another Apterite – multiple record-breaking octochamp Elliott Mellor, who had already become the first contestant to accumulate over 1,000 points across eight preliminary wins.

After Mellor discounted FILATURES in Round 1, Sfyris took the lead with a solution to a very difficult six-small pick from Mellor in Round 3. He then lost the subsequent letters game to Mellor's COALISED, but quickly cancelled the damage out by spotting TREASURE in a five-vowel selection. He extended his gap to 17 with GOATISH, but his lead shrunk to 10 points once again when his gamble of forestudy ☓ backfired. In an extraordinary outcome, his lead held on until a crucial conundrum solve – ending Mellor's run of 10 solved conundrums in a row – and winning Sfyris the title of Series 80 champion and twenty volumes of the OED, and was presented the Richard Whiteley Memorial Trophy. Sfyris achieved 11 maximums and 103 points in the game, and reduced Mellor to his lowest score thus far, and first non-century with 83 points, despite Mellor accumulating more than 1,300 points across the series. Clips of the grand final were shown on Celebrity Gogglebox on 5 July 2019, which infamously displeased comedian Emily Atack.

Sfyris returned to the programme in January 2023 for Championship of Champions XVI, where he played a rematch against Mellor. Sfyris put up a good fight, but unfortunate misfires on resexing ☓ and faisante ☓ contributed to Mellor establishing a 22-point lead, which Sfyris was never able to make a dent into. A difficult conundrum NADNATION was left unsolved by both players, which led to Sfyris bowing out, with a still very respectable score of 88 points.

Sfyris has also taken part in various quiz shows: he appeared on The Weakest Link in 2009, followed by an appearance on The Krypton Factor on 2 February 2010, in which he impressed host Ben Shephard by shining in the mental agility round. One year later, Sfyris appeared on The Chase and Pointless, and then in January 2015 appeared on Tipping Point, where he reunited with Shephard, followed by an appearance on Two Tribes later that same year. His next TV appearance was Fifteen to One in 2016, and then The Boss on BBC One in 2017.