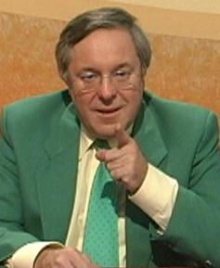 A presenter is a professional TV personality that presents Countdown. There have been seven main presenters in the history of Countdown: Richard Whiteley, Des Lynam, Des O'Connor, Jeff Stelling, Nick Hewer, Colin Murray, and Anne Robinson.

The main job of the presenter is to anchor the show, such as asking contestants for their declarations, reading out the Teatime Teaser since Series 46, marshalling the show, inviting contestants to make selections, and, perhaps most crucially, starting the clock music in each round. Richard Whiteley did not miss a single programme, including the Calendar Countdown series and pilot episodes, until 1997 when he appeared as a contestant against Carol Vorderman, with the presenting being given over to William G. Stewart: he continued to present every single edition of Countdown after that before his death in 2005 following the grand final of Series 53.

Des Lynam, Des O'Connor, and Jeff Stelling all spent several series in the presenter's chair, before the role was given to Nick Hewer in 2012, whose longevity was second only to Whiteley. Due to the 2020–21 COVID-19 pandemic, Hewer missed some special episodes and some of Series 83, during which Colin Murray deputised, before retiring at the end of said series, replaced by Anne Robinson.

Since Series 18, the co-presenter's job is synonymous with that of the arithmetician's when Carol Vorderman took over the letters portion of the game as well. Prior to that, however, the two roles were split up, with the co-presenter's sole job being to put up the letters and numbers on the board. Indeed, during the Calendar Countdown series, these presenters did not even speak, with Whiteley reading out the selections rather than the presenters. Between Series 1 and Series 3, a separate person, Beverley Isherwood, was wheeled out twice per show to put the numbers up, but this role was subsumed by Cathy Hytner once it was realised that it was rather silly to have two separate roles for this. Hytner was replaced by Karen Loughlin for Series 14, and Loughlin was replaced by Lucy Summers for Series 17.

Between Series 54 and Series 59, Vorderman also introduced the guest in Dictionary Corner, but this responsibility was returned to the main presenter for Championship of Champions XIII, when O'Connor and Vorderman were replaced by Jeff Stelling and Rachel Riley. During this time, Vorderman was given equal credit with Lynam and O'Connor as the main presenter, rather than the co-presenter.

Since Series 72, Susie Dent has also been given a co-presenting credit, and thus is given equal credit with Riley.

From Series 1 to Series 17, the Dictionary Corner guest was credited as the co-presenter; this is not the case in this wiki.