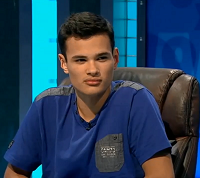 Dylan Taylor, pictured in his first round match, won this championship.

CoC XIV's existence was announced on the c4countdown forum on the evening of 31 July 2014 with initial plans for a January 2015 transmission date. However, it was later postponed to make way for the special episodes at the end of Series 71, and a transmission at the start of Series 73 was also infeasible due to frequent horse racing coverage in the summer.

CoC XIV featured sixteen top players drawn from Series 67 through 72, with Series 73 finalists not participating because the championship was filmed too soon after the Series 73 finals.

This tournament's qualifying standards were undoubtedly the highest of any Championship of Champions to date. All sixteen participants in CoC XIV were – or recently were – practising Apterites at the time. Fifteen are also octochamps (the only exception being Callum Todd). Despite this, however, only one of the entrants, Giles Hutchings, had never been defeated, largely on account of many recent series winners having previously competed and later being asked to return to the show. Of the ten highest-scoring octochamps in Countdown's history up to this point, six became CoC XIV participants, including the three highest of all time (Dylan Taylor, Giles Hutchings and Jen Steadman, all three of whom reached the semi-finals). The average preliminary-game point total for a CoC XIV entrant was 867 points, significantly higher than the cumulative scores of either of the two previous Champions of Champions, Paul Gallen and Steven Briers. With the exception of those from Series 67, which featured none of its members, all octochamps in CoC XIV belonged to the 800 club.

In strong contrast to CoC XIII, CoC XIV's vowel and consonant piles featured virtually no consecutive repeating letters, making for a higher average frequency of nine-letter words; moreover, PETROLAGE, in the Grand Final, was the only nine-letter word not spotted by at least one contestant. The average score achieved by all winning and losing contestants in all games of CoC XIV was 107.4 points, not surprisingly the highest ever by some margin. Taylor's average across his four victories was 121.5 per game.

The bracket structure and first-round pairings for this Championship of Champions were announced on c4countdown on 7 September 2015. They ran as follows: