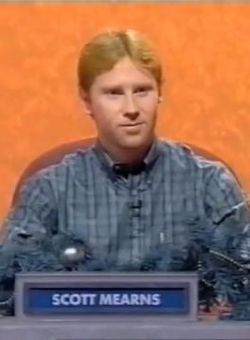 Mearns on a very festive set during his Championship of Champions final. 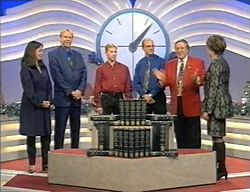 Scott Mearns from Montrose in Scotland was an octochamp in and the champion of Series 41 and Championship of Champions X.

A student at Leeds University when he appeared, Mearns foreshadowed his form on the programme by passing his audition with a 100% score. Famously wanting to "put Montrose on the map", Mearns became an octochamp with an aggregate score of 510, before running out victorious in three relatively tight finals games to win the series. He later returned for the five game Championship of Champions X, wherein he was seeded to automatically reach the semi-final. He defeated Series 39 octochamp Terry Knowles and champion Kate Ogilvie to win the mini-series and claim the title of Countdown's tenth Champion of Champions. Along the way, Mearns demonstrated his prowess with the 4 large and 6 small selections in numbers rounds. He is arguably one of the best players to have not contested the Supreme Championship nor the 30th Birthday Championship.

He first appeared on Countdown in the very first game of Series 41, beating incumbent champion Bobby Johnson by 80 points to 12 in a phenomenal debut performance that included the nine letter word SERRATING. Johnson had amassed his 12 points by the end of round two and failed to score again throughout the rest of the contest, including having compense ☓ disallowed. Mearns unravelled the conundrum VIPERWEED in little more than a second, offering a preview of what was yet to come. His next five games featured scores of 50+, peaking at 76 in his third heat game against Sarah Houchin. Mearns suffered an uncharacteristically low score in his his penultimate heat game, beating William Brewer 34 – 30, but he outplayed Lesley Millar 61 – 27 to become the first octochamp of Series 41, averaging 63.75 points a game. Having secured the third-highest total of the nine round era, Mearns entered the series finals as #1 seed.

After a tense quarter-final against Rory Dunlop, Mearns looked to be tyred heading into his semi-final against Melvin Hetherington, only managing to beat Hetherington in one of the eight preliminary rounds. The close game went to a crucial conundrum, with the scores poised at 58 – 51 in Mearns' favour. Mearns made the most of his small advantage and unravelled HOTWARMER in 2 seconds to wriggle into the Christmas Day final. The other seat in the grand final was occupied by #3 seed Simon Cooper.

A promising letters selection in round 1 prompted Mearns to risk the invalid nine mortalise ☓ whilst Cooper played safe with the eight letter word MORALIST to gain an early advantage. "It sounds like a word," agreed Richard Whiteley and Dictionary Corner guest Rick Wakeman. Mearns was not behind for long as his token 6 small numbers helped steal the lead from Cooper in Round 3. In round 7, Mearns unravelled the conundrum PIESNMASH to lead by 18 points. Poor letters selections resulted in the rest of the game being largely uneventful, though Scott widened the gap to 25 points after his second numbers game. Cooper attempted a comeback with, solving the last numbers game and the conundrum PARTYNITE, but it was too little too late as Mearns ran out the winner by 81 points to 73.

Mearns' remarkable performances in his main series saw him given a bye into the semi-finals of the Championship of Champions X, consisting of just 5 episodes and 6 players. Therein he played Terry Knowles, beating him by 72 points to 46, scoring 7 out of 9 maxes and dropping just 4 points from a max game, before an encounter with Kate Ogilvie in the final. Scott took a 10 point lead after Kate failed to solve her first numbers round, before winning three of the next four rounds outright to build a 34 point lead. This included 10 points from the conundrum MUDHUTLOO, which Mearns unravelled in one second. Thereafter the tables started to turn, as Ogilvie beat Mearns' seven with the eight letter word SPEAKING, before clawing back another seven points with ROTTERS as Mearns had distorter ☓ disallowed. In spite of this, Scott still led by 53 points to 34 and had amassed an unassailable lead by Round 12. He relaxed for the conundrum, UGREATONE, which went unsolved. Nonetheless, Mearns became Champion of Champions only a week after becoming series champion. He was the fourth grand slam winner (undefeated in the heats, finals and Championship of Champions) after Harvey Freeman, Nic Brown and Don Reid.

He later returned to play a special game against Championship of Champions IX winner Natascha Kearsey, losing the game 109 – 100 and surrendering his undefeated streak along with it. While Mearns was in the champions' chair, he could not take full advantage of his numbers skill. Kearsey took the lead and held it, before Mearns had douchal ☓ disallowed, meaning that it was not a crucial conundrum. Nonetheless, Mearns solved SCOTTWHAP to score a century. His 100 was the highest losing score for a special episode, before being beaten by George Armstrong's record of 110, set in Episode S47.