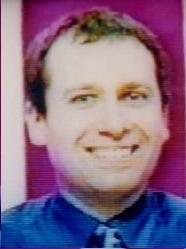 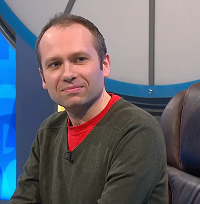 ...and ten years later in the 30th Birthday Championship!

He began his rise to fame in Series 47, debuting on the 14 January 2002. He won his first seven games with centuries (including a 120 – 107 thriller against Terry Rattle) but won his last game with 92, missing out on the opportunity to be the first all-centuries octochamp. His total of 875 points was the twelfth highest of the old 15 round format. He also became the first player to score over 125 points during his game with April Carlin.

In the middle of his run was a classic game against Terry Rattle. Wills was leading 100 – 79 going into the last letters game, where Chris played REACHING to Rattle's CHAGRINED, which Rattle declared as "very dodgy". Dictionary Corner okayed the word and after both players scored 10 points in the final numbers game, it was a crucial conundrum 110 – 107 in Wills' favour. The conundrum LINGOFLOW revealed itself and Wills buzzed in with FOLLOWING before the first second had elapsed. Wills was therefore the highest-scoring octochamp to have had a crucial conundrum game during their run until surpassed by Mark Murray in Series 70. Rattle's 107 was the highest losing score in the 15-round era until David Williams scored 111, also against Chris Wills.

Having totted up a record 875 points, he returned for the series finals as No. 1 seed, beating first Brenda Jolley in the quarter-finals 110 – 86 and then Rupert Stokoe in the semi-finals 118 – 78. In the final he faced the excellent Tom Hargreaves, and beat him comfortably to take the series.

He returned for Championship of Champions XI at the beginning of 2003, and was drawn against the masterful David Williams, holder of the 9-round octochamp record. The game was a classic, with Wills emerging victorious with 113 to Williams' 111. In the quarter-finals, he faced the popular Loz Sands, and won comfortably but without a century. A semi-final score of 120 against John Rawnsley saw him comfortable into the final, where he was strong favourite to beat Graham Nash. The match was not as explosive as hoped, and the crucial conundrum was revealed with the scores at 79 – 73 in Nash's favour. Neither player could solve OVERSPADE, so Nash took the CoC trophy and Wills was beaten at last.

Many fans had expected Wills to face Julian Fell in the CoC final, but Fell had been knocked out early on by Nash. To appease fans, a special "Fell vs Wills" episode was filmed in March 2003 and broadcast on 12 September 2003. Wills was beaten again; this time, Fell was forced to come from behind, but solved the tricky conundrum VICTORIUS in just a few seconds to take the game.

Wills returned for a second special episode on 2 November 2007 for Countdown's 25th anniversary special against Conor Travers, playing a to slightly shorter round format with celebrities selecting the letters and numbers, but lost the game 69 – 58.

He returned to Countdown in 2013, as one of 41 contestants taking part in the 30th Birthday Championship. After receiving a bye to the first round, he won his first match against Series 59 semi-finalist Martin Bishop by a score of 102 – 99, despite behind for the majority of the game. He then met his match in round 2, losing to the still unbeaten Series 63 champion Jack Hurst by a score of 115 – 70.

In his 19 game Countdown career, including the 25th anniversary special, he scored 1,939 points. 1,881 not including the aforementioned game — an average of 104.5 points per game.

Wills has also appeared on Fifteen to One, The Weakest Link (which he won), BrainTeaser (which he also won, but failed to take any prize money), Mastermind, 1 vs 100, A Question of Genius (on which he won £5,000 with his knowledge of The Smiths), Pointless and PopMaster.

He currently works at the University of Leeds, in the Department of Health Studies.